As an art critic, Peter Drew has created a six part online series called Art vs Reality. All aimed at providing information, insight, humour and well-researched opinion on today’s Artworld. After each episode he invites comments from viewers and then ‘grudgingly’ responds to them. So, I was chuffed (possibly slightly flattered) to get his favourite comment to episode 3. ArtvsReality_response (approx. 2 minutes in)

Watch his entertaining series as it unfolds over the coming months: ArtvsReality

Here’s my comment in response to episode 3 (Street Art vs The Art market):
As you point out, Art like everything else repeats itself. So assuming that we are about the cycle of 1874, then the question might be: What is the modern-day equivalent of Impressionism (an Absolute aesthetic-idea) that can present a real alternative to the Artworld? The answer may evolve through subcultures but its only through Absolute ideas that provide the artist with a common philosophy or goal, so that he or she, or collective group, can bring about a sense of purpose and direction that may thrive once again outside the salons. 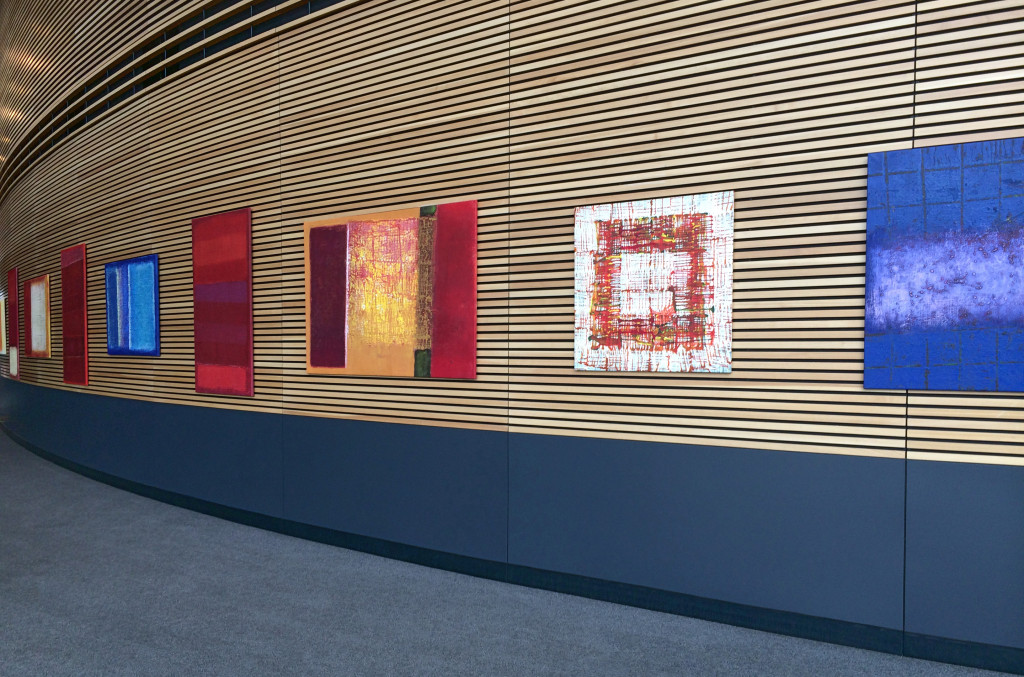 Transcript of my speech made to 70+ guests at the opening cocktail party of Membrane Art exhibition at the Adelaide Convention Centre (Centre ArtBeat) on 4 June 2014:
_ _

So, what preoccupies the perennially tormented mind of the contemporary artist? Quite simply; the language of aesthetic-ideas (aesthetic-thoughts).

But what I want to talk to you about tonight — is how this visual language can be delineated into two parts — absolute and relative ideas. Absolute being what is complete, and relative being something that is dependent upon humans. I particularly want to make this distinction as it relates directly to my art. Art always needs to steer itself away from becoming monotonous, so by defining the merits of ideas itself — or at least by bringing it to your attention — I believe robust, imaginative and independent forms of inquiry may continue to exist. As it is only through the development of absolute-ideas that art has a future that may authentically explore the issues to be debated, the ideas to be contested, and the images yet to be re-imagined.

The mounted works you see on display, are my relative-ideas. Each one has an individual story to tell. The undulating-works-in-progress you see here (below), represent the absolute-idea and is indicative of how every one of my paintings is created. But before I explain this, let me first define, these terms.

RELATIVE: They are relative because they stand in relation to certain conditions or circumstances. They relate to individual human beings. This is what artists execute 99.9% of the time. Pick a topic: Politics; environment; social; religion; sex; make a comment or highlight an issue about it, and hey presto! — you have an exhibition that everyone can relate to.

ABSOLUTE: Absolute-ideas, on the other hand, do not stand in relation to any conditions or circumstances. They prevail at any time or place and under any circumstances. It is a first order thought and can’t be denied or refuted. For example, the idea of Cubism is absolute — show multiple viewpoints on the picture plane. This is a truth that has stood the test of time. So much so, that Cubism has influenced generations of artist, creating a multitude of outcomes with this basic principle.

The objective of absolute-ideas is to provide the artist with a common philosophy or goal, so that he or she, or a collective group, can bring about a sense of purpose and direction. Whatever the means, you either — respond with it, or react against it. 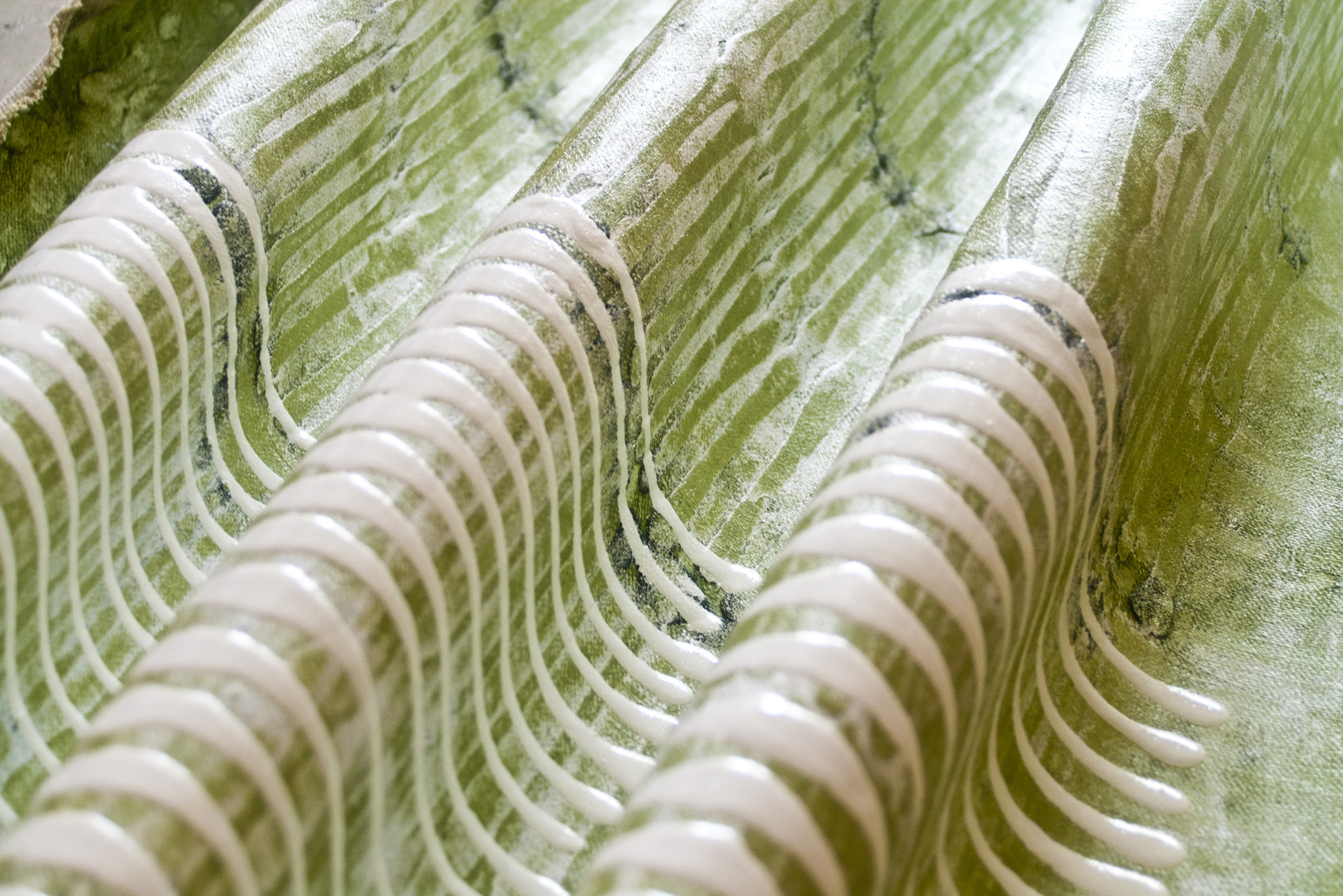 So what makes these undulating membranes absolute?

10 years ago, almost to the month, it hit me. If I could just undulate the surface before I painted on it, I might be able to capture the pervasive features that shape our natural landscape — then at a later date, compress the depth by returning the work to the flat picture plane.

This was a liberating thought, and it quickly became obvious that it was a much larger idea then just about landscape, it was science. However, with no obvious historical art references to show me the way, I continued experimenting on my own, trying various materials and techniques, including sizing my own linen, as well as trying to overcome technical issues. But most importantly, I needed to be able to repeat the idea, in a variety of ways, in order to build a body-of-work that could confirm my assertion — Membrane Art holds the principle view: that the confluence of events in nature and human observation occur as one and the same. DISCUSS: [The undulating membrane is nature. The flat-plane is observation. The membrane creates the basic structure for the work. Through the act of compressing the depth, after applying a series of multiple dimensional values, you begin to reveal a truth about the human experience of observation. Nothing disappears! It just changes its form on the surface].

10 years on, Membrane Art prevails as an absolute aesthetic-idea. It can’t be mistaken as a technique or process, as it is about understanding space and surface in order to build the relative-ideas. It shows us that we are blind to the internal workings of nature. I hope that by displaying these undulating-works-in-progress — and explaining the methodology behind my thinking — you can see much more work can be achieved which has not consciously been recognised anywhere. More importantly, I hope that other artists embrace or challenge the idea, as it is often through the collective group that good ideas gain momentum and flourish for the benefit of all.

Absolute aesthetic-ideas don’t come around very often and given recent scientific discoveries about the laws of nature (like the Higgs Field), Membrane Art could well be the contemporary visual language for our times.

I’ve been selected as a finalist in the prestigious Waterhouse Natural Science Art Prize for 2014 (Category A – Paintings).

This highly competitive event is one of Australia’s most prestigious art competitions. With a total prize pool over $100,000, makes it one of the richest arts’ prize in Australia, attracting many national and international entries.

The competition invites artists to investigate the world around them and present their own perspective on natural science. Since, my work (Membrane Art) has its basis in ‘science’, as you can imagine, I’m just thrilled to be recognised.

Prize winners will be announced at a media call at the South Australian Museum at 10:30am on Thursday 24 July 2014.